Skip to Content
Home / Decor / This Cozy 480 Square Feet Studio Is Home Base To A Retired Couple With Wanderlust. 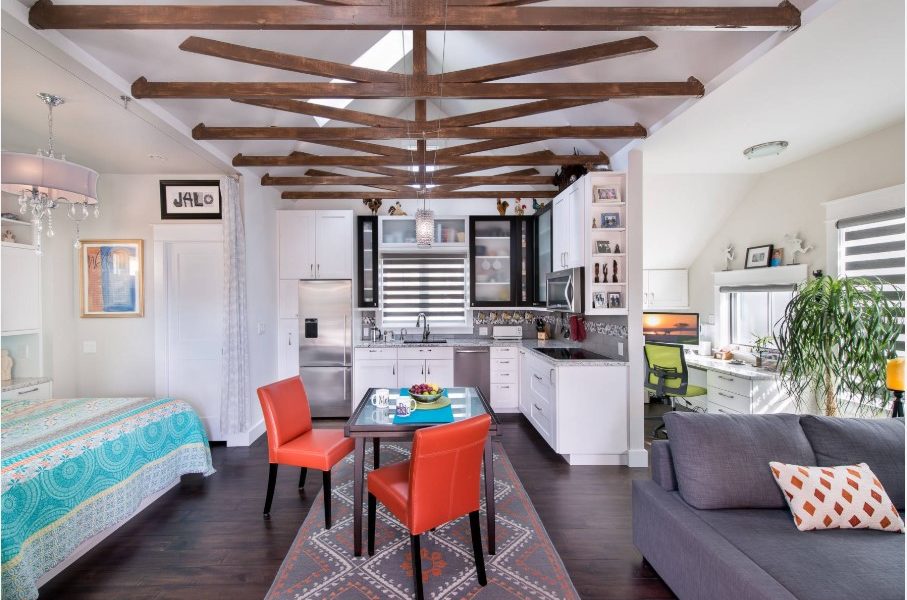 At 480 square feet, Prospect Carriage House in Prospect, Colorado has become home base for a retired couple that spends half of their time traveling in Colorado and abroad. They own and used to live in the attached main house, and now rent it out to fund their senior adventures.

This remodel transformed a dark, cramped interior into a lively, modern, yet humble abode. Inside, every wall and nook was carefully designed with a distinct purpose. The bathroom is unconventional in that there is a private toilet and tub, but the vanity is in open space.

The carriage house itself was only expanded by 40 square feet, but exposing the existing roof beams into a vaulted ceiling added volume for the whole space to breathe. A deck was added on top of the garage, which doubles the living space during favorable Colorado seasons.

We admire this newly married couple that purposely downsized so they could afford their desired lifestyle. The space forces them into an ease and efficiency that they now appreciate. They laugh about getting dressed in the kitchen from time to time, and their washing machine doubles as a laundry basket. The man and woman caves were left behind and they have no regrets.

How To Decorate Small Spaces? -The Ultimate Guide!